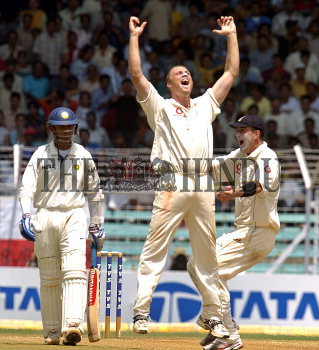 Caption : England captain Andrew Flintoff celebrates after taking the wicket of Indian skipper Rahul Dravid, caught by wicketkeeper Geraint Jones, as teammate Kevin Pietersen rushes to greet the bowler on the fifth and final day of the third cricket Test match between England and India at the Wankhede Stadium in Mumbai, on March 22, 2006. Photo: S. Subramanium