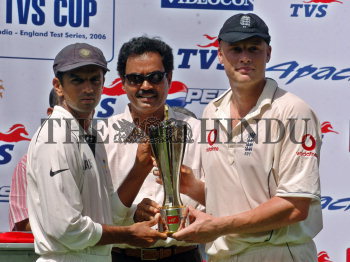 Caption : Indian captain Rahul Dravid and England Skipper Andrew Flintoff pose with TVS Cup as former Indian captain Dilip Vengsarkar looks on during the presentation ceremony of the third and final cricket Test match between England and India at the Wankhede stadium in Mumbai, on March 22, 2006. England beat India by 212 runs to tie the threeTest series 1-1. This is England's first test victory on Indian soil in 21 years. Photo: S. Subramanium