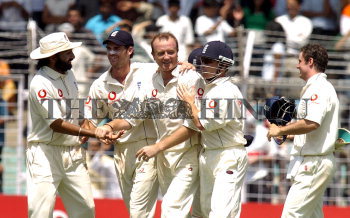 Caption : England bowler Shaun Udal (middle) being greeted by teammates Monty Panesar, James Anderson and Ian Bell for dismissing Indian batsman Harbhajan Singh(not in pic.) on the fifth and final day of the third cricket Test match between England and India at the Wankhede Stadium in Mumbai, on March 22, 2006. Photo: S. Subramanium