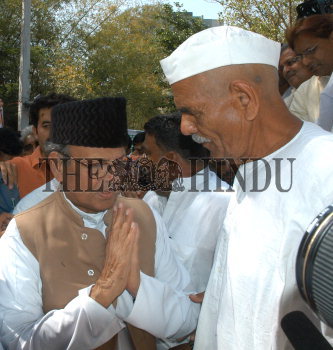 Caption : Bhartiya Kisan Union president, Ch. Mahinder Singh Tikait with former Prime Minister, V.P. Singh at a protest rally against UPA Government, demanding withdraw decision to import 5 lakh tonnes of wheat in the interest of Indian farmers and India, must stop pushing conclusion of Doha Round of WTO negotiations. Do not compromise agriculture for gains in NAMA and Services at Jantar Mantar in New Delhi on March 21, 2006. Photo: Shanker Chakravarty