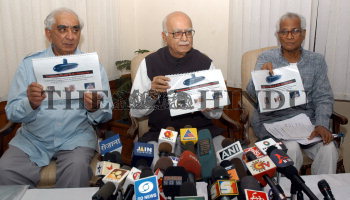 Caption : Leader of the Opposition, L. K. Advani (centre) seen with NDA Convenor, George Fernandes (right) and former Defence Minister, Jaswant Singh at a press conference against UPA Government and announce NDA demands for a Commission of Inquiry to unearth the truth about the 'War Room Leak' and Kickbacks in the Rs. 18798-Crore Scorpene Submarine Deal (Scorpene Scam and Its Cover-Up) in New Delhi on March 20, 2006.. Photo: Shanker Chakravarty