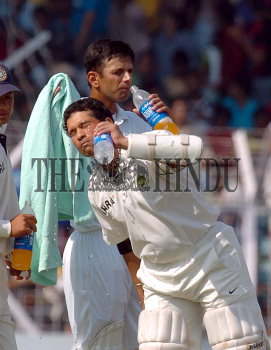 Caption : India's Sachin Tendulkar pours water on his face to beat the heat as Rahul Dravid quenches his thirst during a DRINKS BREAK in the Indian first innings on the second day of the third and final cricket Test match between England and India at the Wankhede Stadium in Mumbai, India, on March 19, 2006. Photo: S. Subramanium