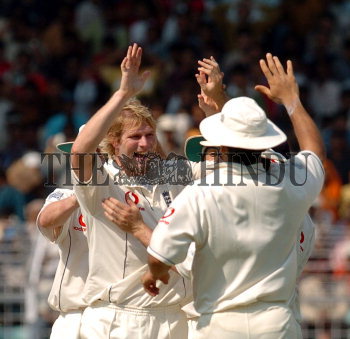 Caption : England fast bowler Matthew Hoggard celebrates with teammates after dismissing Indian batsman Wasim Jaffer (not in pic), caught by wicketkeeper Geraint Jones, on the second day of the third and final cricket Test match between England and India at the Wankhede Stadium in Mumbai, India, on March 19, 2006. Photo: S. Subramanium