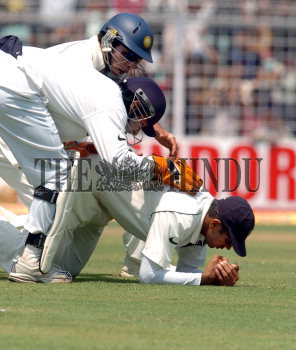 Caption : Indian captain Rahul Dravid (on the ground) being greeted by wicketkeeper M.S. Dhoni and Yuvraj Singh after he took a diving catch to dismiss England batsman Owais Shah (not in pic) on the second day of the third and final cricket Test match between England and India at the Wankhede Stadium in Mumbai, India, on March 19, 2006. Photo: S. Subramanium