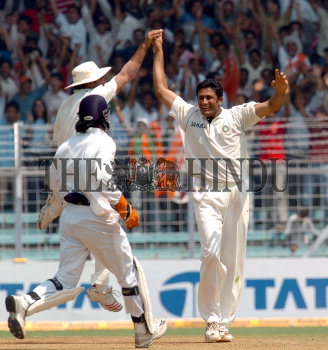 Caption : Indian leg-spinner Anil Kumble (ext right) celebrates with a teammate after dismissing England skipper Andrew Flintoff (not in pic) as wicketkeeper M.S. Dhoni rushes to join the celebration on the second day of the third and final cricket Test match between England and India at the Wankhede Stadium in Mumbai, India, on March 19, 2006. Photo: S. Subramanium