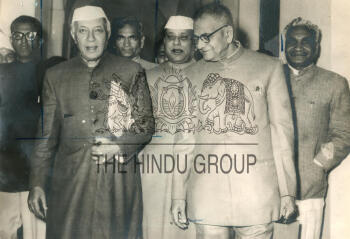 Caption : T.T. Krishnamachari, Union Finance Minister, along with Indian Prime Minister Nehru, on his way to the Lok Sabha for the presentation of the Central Budget, in New Delhi on February 29, 1964. Satyanarain Sinha, Union Minister for Information and Broadcasting, is in the centre. (Published in The Hindu on March 02, 1964) PHOTO: THE HINDU ARCHIVES