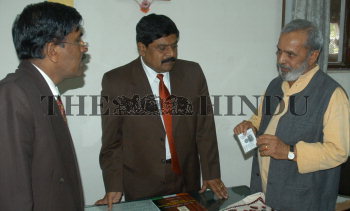 Caption : I am U. R. Anantha Murthy. Just half an hour back, I decided to contest for the Rajya Sabha election. I won't be able to bring voter list before 3pm today, but I have my voter ID. Will this do to file the nomination? This was the conversation between noted writer, U. R. Anantha Murthy and returning Officer B. S. Patil. Later he filed his nomination and promised to bring the voter list and his photographs (He even requested the battery of photographers to provide one) before the scrutiny on March 18, 2006 morning by 11 am in Bangalore. Photo: K. Bhagya Prakash