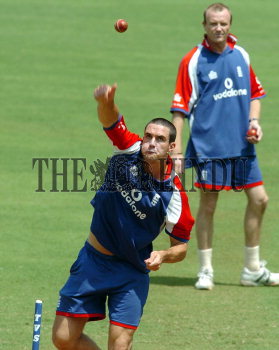 Caption : England's Kevin Pietersen gets some bowling practice as Shaun Udal looks on during the team's practice session on the eve of the third cricket Test match between England and India at the Wankhede Stadium in Mumbai, on March 17, 2006. Photo: S. Subramanium