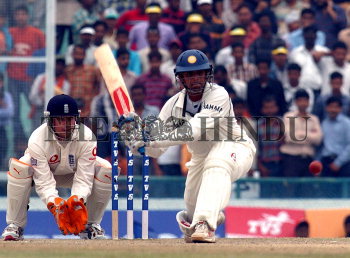 Caption : Indian captain Rahul Dravid eyes the ball for a sweep shot to the fence off Monty Panesar (not in pic.) as wicketkeeper Geraint Jones looks on during the second cricket Test match between England and India at the PCA Stadium in Mohali, India, on March 13, 2006. Photo: S. Subramanium