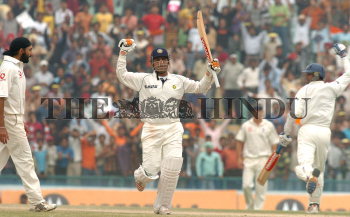 Caption : Indian batsmen Virender Sehwag (left) and Rahul Dravid celebrate watched by Monty Panesar after winning the second cricket Test match between England and India at the PCA Stadium in Mohali, India, on March 13, 2006. India beat England by nine wickets in the match and leads the three Test series by 1- 0. Photo: S. Subramanium