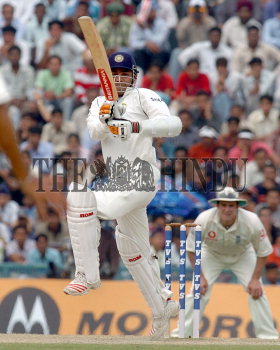 Caption : Indian batsman Virender Sehwag plays a shot t off the bowling of Steve Harmison (not in pic) during the fifth and final day of the second cricket Test match between England and India at the PCA Stadium in Mohali, India, on March 13, 2006. Photo: S. Subramanium