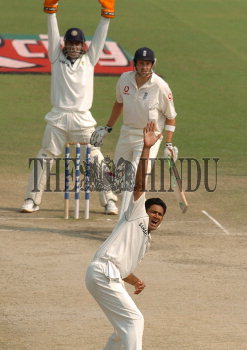 Caption : Indian bowler ANIL KUMBLE along with wicketkeeper M.S.Dhoni unsuccessfully appeals for Steve Harmison's dismissal on the fifth and final day of the second cricket Test match between England and India at the PCA Stadium in Mohali, India, on March 13, 2006. Harmison later succumbed to a delivery off ANIL KUMBLE. Photo: S. Subramanium