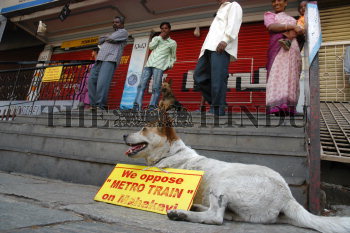 Caption : The dog became the star attraction when some one tied a placard to its neck and the dog faithfully led the protesters all over the route they marched through the roads where shops also closed. Mahakavi Kuvampu Road residents staged a protest rally against Metro Train on their road in Bangalore on March 13, 2006. Photo: K. Gopinathan