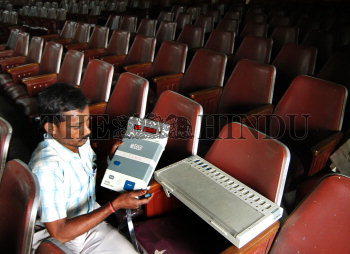 Caption : An election official inspecting an Electronic Voting Machine (EVM) during the first phase of EVM orientation camp being held in Guwahati on March 11, 2006. Such EVM orientation camps being organised all over the State for the forthcoming Assam Assembly election which will be held in two phases on April 03 and 10, 2006. Photo: Ritu Raj Konwar