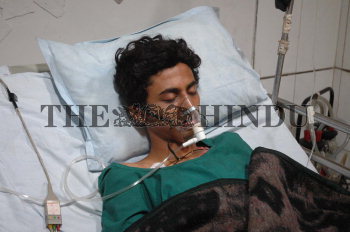 Caption : Abhishek Chandan, a student of Don Bosco School, Patna who had gone missing and was suspected to have been abducted, being admitted in Chirayu hospital, in Bhopal on March 10, 2006. Abhishek was found in an unconscious state near the Bhopal railway station on March 09, 2006, with his hands and feet tied. Photo: A.M. Faruqui