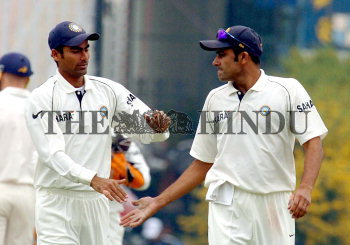 Caption : India's Mohammad Kaif congratulates Anil Kumble (right) for getting the wicket of England batsman Paul Collingwood (not in pic) on the second day of the second cricket Test match between England and India at the PCA Stadium in Mohali, India, on March 10, 2006. Anil Kumble is two wickets short of 500 Test dismissals. Photo: S. Subramanium