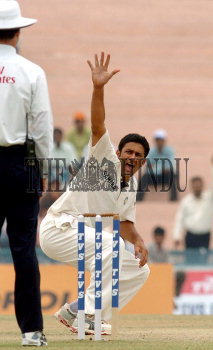 Caption : Indian leg-spinner Anil Kumble appeals unsuccessfully for an lbw decision against England batsman Andrew Flintoff (not in pic) on the second day of the second cricket Test match between England and India at the PCA Stadium in Mohali, India, on March 10, 2006. Photo: S. Subramanium