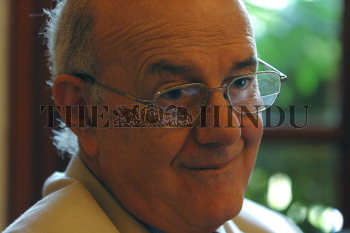 Caption : Sir Igor, who specialises in the area of enhancing the efficiency and accountability of the judiciary, was in Chennai for a short visit to interact with lawyers, judges and academics. Called to the Bar in 1963, Sir Igor Judgeās first judicial appointment was as a Recorder of the Crown Court in 1976. In 2003, he was appointed Deputy Chief Justice of England and in October 2005, became the first President of the Queenās BENCH Division (England and Wales). Photo: R. Ragu 10-3-2006