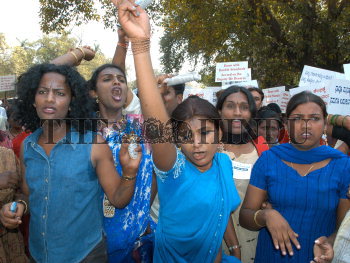 Caption : Sex Workers during a rally protesting against the criminalisation of sex workers' lives and livelihoods under the amendment bill, recognition and rights for their role in preventing HIV and AIDS, seeking inclusion of sex workers' as allies in anti-trafficking efforts and calling on the Government to review its anti-prostitution policy and recognise sex work as work, to mark the International Women's Day in New Delhi on March 08, 2006. Photo: Shanker Chakravarty