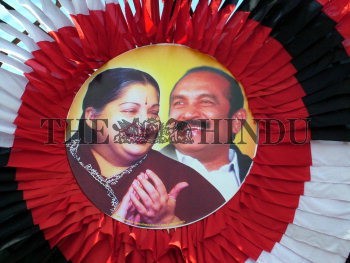 Caption : Several cutouts and hoardings are seen in the city after the ruling AIADMK and MDMK forged an alliance to face the Assembly polls 2006. Jayalalithaa and Vaiko in a colourful flag cut out erected at Camp Road Junction, Selaiyur near Chennai on March 06, 2006. Photo: A. Muralitharan