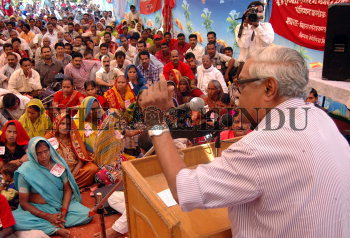 Caption : AITUC's National General Secretary and Member of Parliament, Gurudas Dasgupta addressing a public meeting in Bhopal on March 06, 2006, before the demonstration at State Assembly for protest against the Union Government's and State Government's anti-people and anti-labour policies. Photo: A.M. Faruqui