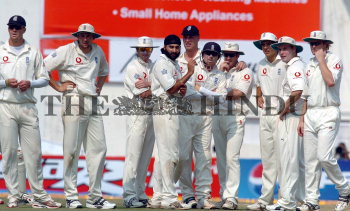 Caption : ENGLAND players wait for the third umpire's decision after they appealed for a catch against Indian batsman Wasim Jaffer on the second day of the first cricket Test match between ENGLAND and India at the Vidarbha Cricket Association Stadium in Nagpur, India, on March 02, 2006. The appeal was turned down by the umpire. Photo: S. Subramanium