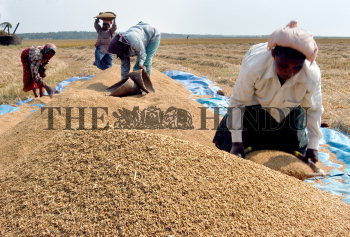 Caption : Harvesting of organically-cultivated paddy in progress at Puzhakal, Thrissur district in Kerala. The organic farming of paddy using the rice variety 'Jyothi' was introduced by, the Adat Farmers Co-operative Bank in select 1000 hectares in Puzhakal, Puranatukara and Adat villages with the participation of nearly 2300 farmers. The farmers hope to harvest nearly 5500 tonne paddy, which has been priced at Rs. 1000 per quintal. Ernakulam-based Nest Group has already purchased the paddy. The farmers used Neemcake and oil, garlic, chilly, tobacco extract and Massurifose in place of chemical fertilizers and pesticides, states Mr. M.V. Rajendran, President of Adat co-operative Bank. He also claimed that it was for the first time in the country that organic paddy farming was done to this extent. The bank supported the farmers by offering them interest-free loans. Photo: K. K. Mustafah 2/03/2006