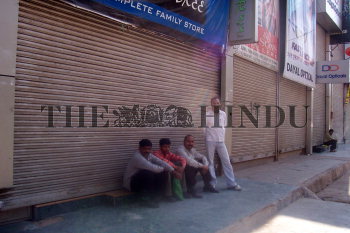 Caption : Shopkeepers sitting in front of their shops which were closed at Rajouri Garden in New Delhi on March 1, 2003 due to a strike call given by the Confederation of All India Traders against Municipal Corporation of Delhi's public notice to close down shops in residential areas and also against the ongoing demolition drive. Demonstrations, protest rallies and bandhs were organised at various markets in the city. Several markets and traders' associations joined the strike and observed the bandh that affected commercial activities in both wholesale and retail markets of Delhi. Photo: Shiv Kumar Pushpakar