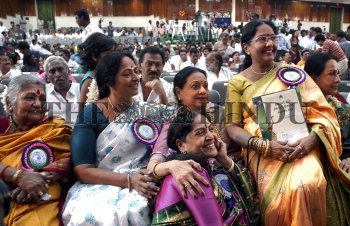 Caption : Actresses (from left) Muthulakshmi, K.R.Vijaya, Padmini, Sachu (Saraswathi) (seated on the floor), Sarada and Sheela, at the function for presenting the State Film Awards for the year 2003 - 2004, in Chennai on February 23, 2006. Photo: V. Ganesan