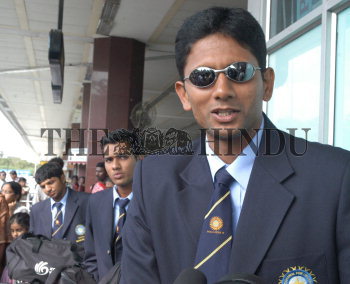 Caption : Indian under 19 cricket team's coach Venkatesh Prasad arrives along with team members at the Anna International Airport in Chennai from Sri Lanka on February 20, 2006. India lost to Pakistan by 38 runs in the final of the ICC under-19 World Cup held at R. Premadasa Stadium in Sri Lanka on February 19, 2006. Photo: V. Ganesan