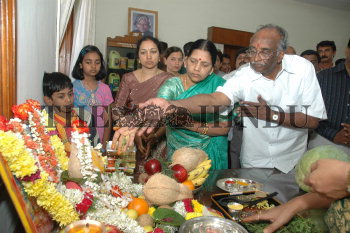 TIME FOR POOJA AND CELEBERATION FOR THE NEW MINIST

Caption : Time for pooja and celeberation for the new ministers who took oath of office on February 17, 2006 in Vidhana Saudha. Corridors of Vidhana Saudha turned very active and crowded with supporters, family members and well wishers, chanting of mantras could be heard every where. Shankarmurthy and family members performing pooja at his office Room No. 343 in Bangalore on February 18, 2006. Photo: K. Gopinathan