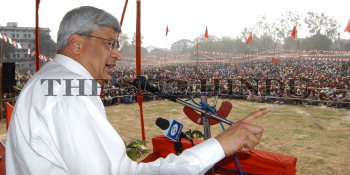 Caption : The CPI(M) general secretary Prakash Karat strongly opposing United States President George Bush’s visit to India, at a state level rally, in Guwahati, on February 12, 2006.The U.S. President is scheduled to come to India on March 02, 2006 and the CPI(M) kicks off it's election campaign in Assam with this meeting. Photo: Ritu Raj Konwar