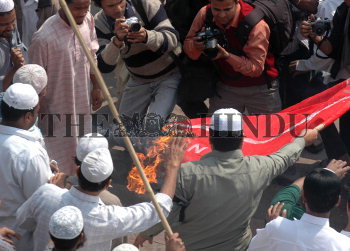 Caption : Thousands of Muslims demonstrate by burning the flag of Denmark to protest against the cartoons published in European newspapers depicting Prophet Muhammad, at Jama Masjid in New Delhi on February 09, 2006. Photo: Rajeev Bhatt