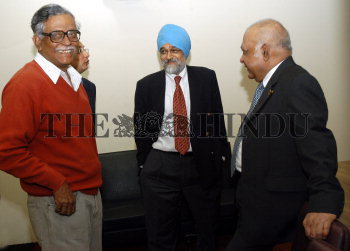 Caption : (From left): CITU leader, Gurudas Dasgupta, Vinayak Chatterjee of CII, (partly hidden) Deputy Chairman Planning Commission Montek Singh Ahluwalia and Subir Raha, Chairman and MD of ONGC, at a seminar on 'How the Union Budget should look like ?', organised by CITU at the Parliament Annexe in New Delhi on February 10, 2006. Photo: V.V. Krishnan