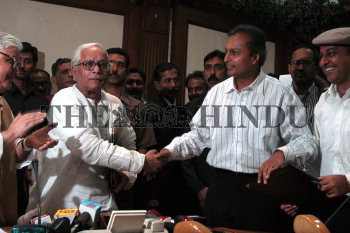 Caption : The Chairman of Anil Dhirubhai Amabni Group, Anil Ambani and the Chief Minister of West Bengal, Buddhadev Bhattacharjee at Writers Building in Kolkata on February 10, 2006. ADAG signed a MoU with the West Bengal Government for setting up the Dhirubhai Ambani Institute of Information and Communication Technology (DA-IICT) at Kalyani here. DA-IICT, a deemed university, already has a campus at Gandhinagar in Gujarat, is considered as a launching pad for students pursuing specialised courses in IT and Communication Technology. Photo: A. Roy Chowdhury