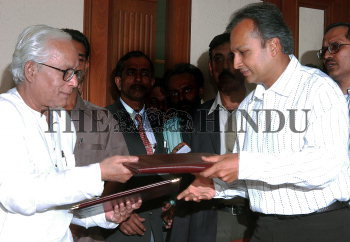 Caption : The Chairman of ANIL Dhirubhai Amabni Group, ANIL Ambani and the Chief Minister of West Bengal, Buddhadev Bhattacharjee exchanging documents at Writers Building in Kolkata on February 10, 2006. ADAG signed a MoU with the West Bengal Government for setting up the Dhirubhai Ambani Institute of Information and Communication Technology (DA-IICT) at Kalyani here. DA-IICT, a deemed university, already has a campus at Gandhinagar in Gujarat, is considered as a launching pad for students pursuing specialised courses in IT and Communication Technology. Photo: A. Roy Chowdhury