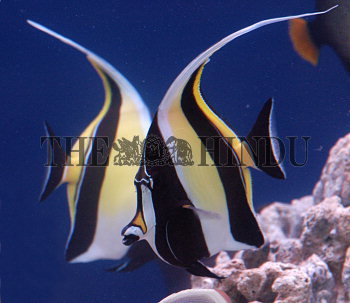 Caption : A Moorish Idol frolic in the waters of an aquarium in Kochi. The country's rich marine water resources around Andaman, Nicobar and Lakshwadeep islands abound in myriad varieties of marine ornamental fishes. The country's export of ornamental fishes is solely dominated by native varieties,majority of which comes from North East region. The total export of ornamental fish during 2004-05 was worth Rs 443.84 lakh and the destinations catered to are in Asia,Europ and USA. The country contributes 5 per cent of global production and 4 per cent in value. Photo: K.K. Mustafah 10/2/2006