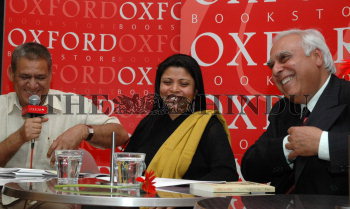 Caption : Union Minister for Science and Technology and Ocean Development, Kapil Sibal at the release function of a book "Nine On Nine", a collection of short stories, authored by Journalist and Columnist Nandita Puri, in New Delhi, on February 09, 2006, as her husband and well known film personality Om Puri looks on. Photo: Rajeev Bhatt