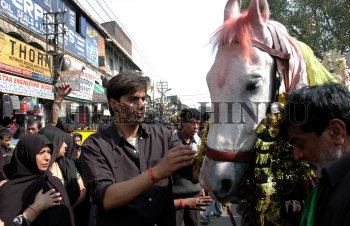 Caption : Shiite Muslim devotees touch the horse, a symbol of Hussein's horse which carried him in battlefield, to pay tributes during a religious procession on the tenth day of the holy month of Muharram, in New Delhi on February 09, 2006. Thousands of young and old march together during Ashura, which is the 10th day of the lunar month of Muharram when according to Islamic tradition Imam Hussein, grandson of the Prophet Mohammad, was killed in the battle in Karbala, near Iraq, in AD 680. Photo: Rajeev Bhatt