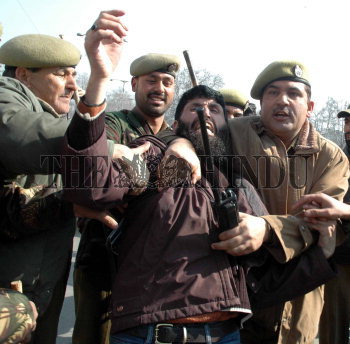 Caption : Shiite Muslims scuffle with Jammu and Kashmir policemen, as they gather to commemorate the martyrdom of Imam Hussain, the grandson of Islam's Prophet Muhammad in Srinagar, on February 09, 2006. During the Shiite Muslim holy month of Muharram, large processions are formed and the devoted followers parade the streets holding banners and carrying models of the mausoleum of Hazrat Imam Hussain and his people, who fell at Karbala. Shias show their grief and sorrow by inflicting wounds on their own bodies with sharp metal tied to chains with which they scourge themselves, in order to depict the sufferings of the martyrs. Photo: Nissar Ahmad