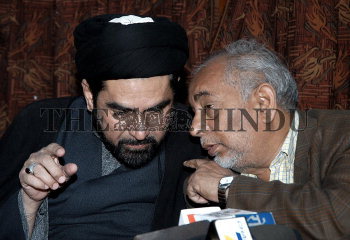 Caption : Maulana Kalbe Jawad and Khalid Sabir (right), president Muslim Majlis Uttar Pradesh during a press conference, in Lucknow, on February 07, 2006 to condemn the goverment's decision to vote against Iran's civilian nuclear programme and also condemning the assault on Muslim sentiment by the Danish and European newspapers publishing the cartoons of Prophet Mohamad. Photo: Subir Roy