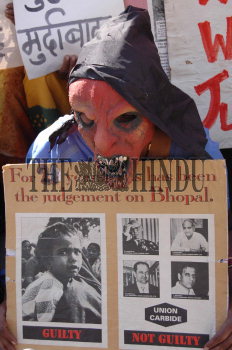 BHOPAL GAS VICTIMS DEMONSTARTING WITH THE MASKS AT

Caption : The relatives of the victims of December 2-3, 1984 Union Carbide BHOPAL Gas tragedy, organised a demonstration by holding the photographs of their relatives and wearing a mask, at the BHOPAL District Court on February 07, 2006, demanding capital punishment to the accused officers of the Indian subsidiary of the American multinational Union Carbide India Limited, during the second day of the hearing of BHOPAL Gas disaster case. Photo: A.M. Faruqui