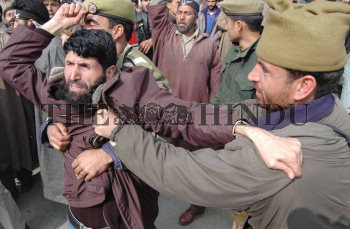 Caption : Policemen detained activists of Kashmiri Shia during a demonstration in Srinagar, on February 07, 2006. The activists were attempting to gather for the Muharram procession in the city but a local law forbids assembly of more than four persons without government's permission. Photo: Nissar Ahmad