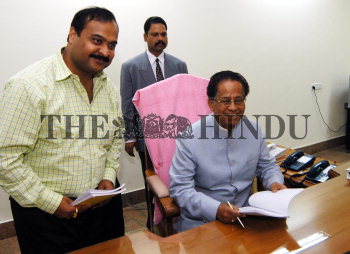 Caption : Assam Chief Minister Tarun Gogoi along with Finance Minister Hemanta Bishwa Sarma, having a final look at the Assam Budget-2006 (Vote on Account), before producing it at the Assembly Budget Session in Guwahati on February 06, 2006. This is the last budget session for Tarun Gogoi, as the Assembly election is scheduled to be held in the month of April 2006. Photo: Ritu Raj Konwar