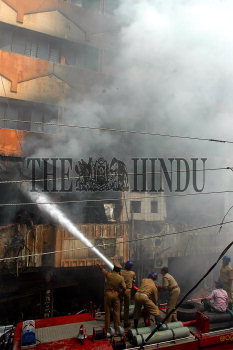 Caption : Firemen are busy in the fire-fighting operation as smoke engulfed from the multistoried building, after a major fire broke out in the first two floors of an eight-storied Pushpanjali commercial complex, which houses showrooms of textile brands, book shop, a reputed chit fund company office, photo-studios and private tele company showrooms, at Koti, in Hyderabad on February 05, 2006. Later the fire spread to other floors, resulting in loss of several crores of rupees. Photo: Mohammed Yousuf