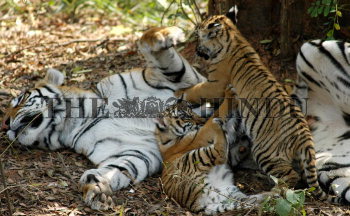 Caption : Three months old cubs of Royal Bengal tiger play as their mother Shwati takes rest nearby in Guwahati zoo on February 05, 2006. Shwati was brought from Mysore zoo along with three other tigers which gave birth to these two cubs on November 2005. Father of these two cubs was captured by the zoo officials from Sonitpur district of Assam, when he came out from jungle and killed one person and injured several others. Zoo officials are happy for having wild tiger babies in zoo which will give a new generation of Royal Bengal tigers and these two cubs has become a major attraction for the visitors these days. Photo: Ritu Raj Konwar