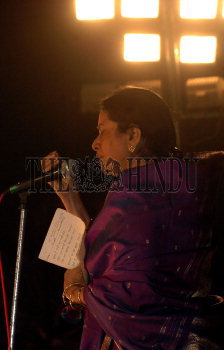 Caption : Veteran multi-lingual playback singer Vani Jairam enthrals audience during the Musical Nite organised by city based NGO Raksha International Foundationin Jalavihar in Hyderabad on February 04, 2006, to raise funds for a cowshelter. She started her career in Bombay,1971 with "Bole Re Papihara" rendered in her inimitable style for the film 'Guddi'. Vani who recorded 8000 songs in 14 languages and became the first female playback singer who sung with all Indian male playback singers. Photo: Mohammed Yousuf.