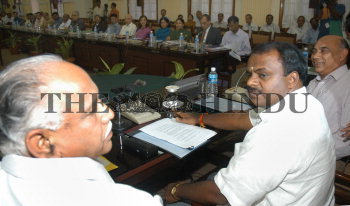 CHIEF MINISTER H.D.KUMARASWAMY AT THE MEETING OF S

Caption : The Chief Minister H.D.Kumaraswamy (centre) first meeting with officials after being sworn-in as Chief Minister along with Deputy Chief Minister B.S.Yediyurappa and chief secretary B.K.Das (left) at the meeting of secretaries and top government officials, in Bangalore, on February 04, 2006. Photo:K. Gopinathan