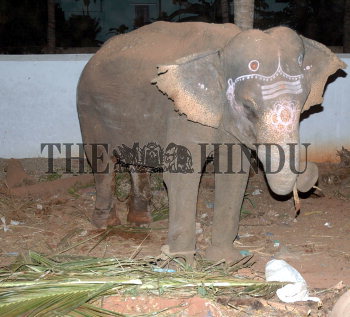 Caption : At the Lawspet police station in Pondicherry, Easwari, the elephant, is waiting for the release of her mahout, who is under detention. The elephant was on her way back from a film shooting at Chingleput on February 02, 2006 night, and had pushed down a COOLIE who in a drunken stupour tried to feed a banana for the third time after she refused it twice. The injured COOLIE has been hospitalised. Veterinary doctors from the animal husbandry department will be examining the animal for any possible behavioural irregularity. Photo:T. Singaravelou Pondicherry Digital Picture . 03/02/06