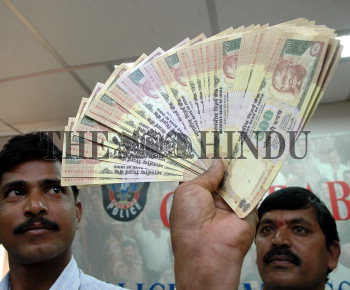 Caption : A sheaf of fake 500 rupee notes recovered by the Cyberabad police on February 03, 2006. The high -precision technology used by the counterfeiters has surprised the investigating officials as the notes were accepted by banks, as a test case,during investigation by the police . The four member gang was busted and Rupees 3.5 lacs recovered. Photo: P.V. Sivakumar